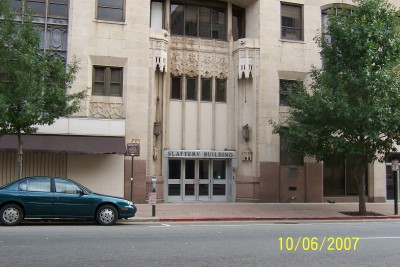 In 1923 at the age of 80, John Bernard Slattery began construction on the skyscraper which would come to bear his name. Upon its completion in 1926, the Slattery Building was the tallest privately owned building in the state. Today, the building is home to a number of businesses and offices. For over eighty years it has silently watched over the growth of the city, and while it is far from being the tallest building, it is still impressive. It is also on the National Register of Historic Places.

No one knows the identity of the spirit that has been heard knocking about the top floor. Some locals claimed to have both seen and heard a man walking about the top floor. Members of the Slattery family (who sold the building in 1999) speak of a handy man who fell to his death into a large fan on the roof of the skyscraper. However, it is not known if this is the ghost who occupies the building. Because of the unknown identity of the spirit and the spirit’s motives for haunting the top floor, it is a most mysterious haunting.